What is Tank Blanketing?
Gas blanketing systems are used to prevent the escape of liquid vapors into the atmosphere or to prevent moisture from entering a tank and contaminating its contents. A tank blanketing valve maintains an inert gas blanket (usually nitrogen or carbon-dioxide) in the vapor space of a pressure-tight liquid storage vessel. This process is accomplished by utilizing a steady high-pressure gas source and the Shand & Jurs 94270 “VAPOR GUARD” so that flow is limited to a constant value when the tank pressure drops below the set point. The valve limits the minimum pressure of the gas blanketing to cope with outdoor temperature reductions or pump outs without in-breathing air. When pressure inside the vessel exceeds the valves set point the main valve shuts off. If pressure increases due to outdoor thermal heating, or product pump-ins, the separate breather valve opens and relieves the excess pressure. One advantage of using the Shand & Jurs “VAPOR-GUARD” is that only one valve is needed to maintain precise blanketing regulation while conventional recovery systems require several regulators to achieve the same results.

How does it work?
The Shand & Jurs 94270’s compact design allows the valve to be mounted directly on the tank which in turn not only reduces the number of necessary connections, but also possible leak points. Models are available with female thread connections and welded or threaded-on flanges. The 94270 has a balanced, piston operated, main valve so that the set point pressure is virtually unchanged at any given inlet pressure within the specified operating range. The “VAPOR GUARD” has a modulating type action valve that opens and closes automatically, maintaining a closely controlled blanket pressure and gas flow. The modulating action simplifies the valve design thus increasing reliability and reducing maintenance costs. The “VAPOR GUARD” operates in the closed position whenever the tank pressure is satisfied or exceeds the set pressure. Whenever the sensed pressure decreases, the set pressure spring and diaphragm assembly causes a downward force such that the main valve will open proportionately to control pressure and limit capacity. 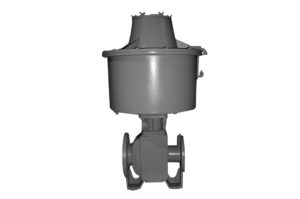 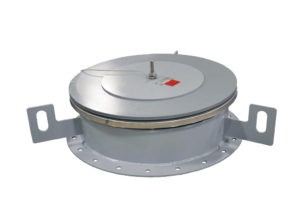