Primary Areas of Application
Severe Environments
Where the environment is too hostile to permit reliable operation of photo-electric controls. Microwave 320 is unaffected by dust, smoke, fog or vibration.

High Temperature Environments
Model MT 861 and MR 861 transmitters and receivers are designed for high temperature service. Please note: These sensors are water cooled to maintain an operating temperature of +140°F (+60°C) or less at the pre-amplifier.

Principle of Operation
These controls are non-contact sensing microwave based controls. The transmitter (source) consists basically of a power supply, pulse modulator, Gunn oscillator, and directional antenna. The receiver consists of a directional antenna, a microwave mixer cavity with a Schottky barrier diode detector, a high gain, low noise amplifier, a pulse coding network, a voltage comparator circuit and a relay driver circuit. In the transmitter, power is converted to a well regulated and filtered 12 Volts DC supply. It is then pulsed at about 1 kHz by the pulse modulator circuit. This circuit is included to permit pulse discrimination circuitry to be used. In addition, pulsing at a 10% duty cycle safely permits peak transmitted power levels 10 times greater than permitted under continuous wave operation. The pulsed DC is fed to a Gunn oscillator in the antenna assembly, where the 12 Volts DC 1 kHz square wave is converted to a pulsed X band (10.525 gHz) microwave signal. The signal is radiated by the directional antenna, which is typically a 10dB gain horn with a beam spread of approximately 40°.

In the receiver, the signal is received by a directional antenna and coupled to a mixer cavity containing a Schottky detector diode. This diode converts the low level microwave signal to a low level pulsed DC, which is then amplified by an adjustable gain — low noise IC amplifier to a 0-10 Volts DC control signal. This system is interconnected and uses pulse discrimination coding. In these systems the receiver is on only when the transmitter is on, thus the system is virtually immune to false triggering from stray microwave interference. The level of the amplified received signal (0-10 Volts DC) is compared with a preset value in a voltage comparator circuit. When the signal received exceeds the comparator set-point, an output signal in initiated which is processed through time delay circuits to drive the output relay.

A microwave system has been described in the above, based on a fixed power transmitter and a receiver/detector with adjustable gain to discriminate between various signal power levels received at its antenna. Materials in the industrial environment have various effects of microwave signals. For example, low level microwaves cannot penetrate metals, but are reflected by them. They are absorbed almost entirely by water, and to varying degrees by water based solutions or products that have a significant moisture content such as grain, wood products, etc. 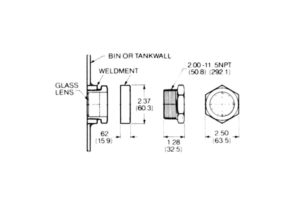